a Film by David Induni

"Heritage, the descendants of William Tell" has been Awarded for "Best  documentary film" at the Nova Film Festival in USA.

"Heritage, the descendants of William Tell" has been Awarded for "Best editing and sound documentary film" at the Jaipur International Film Festival in India. 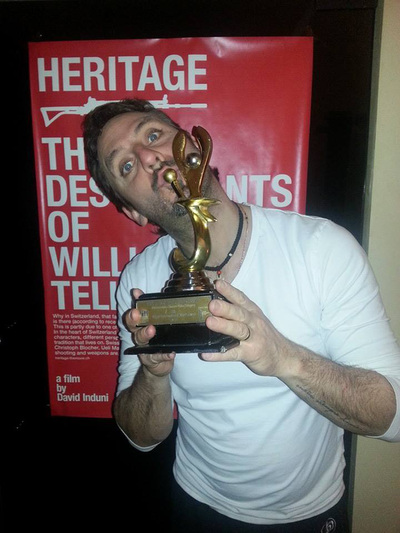 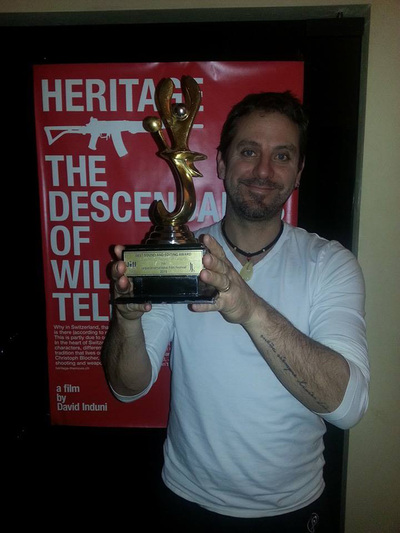 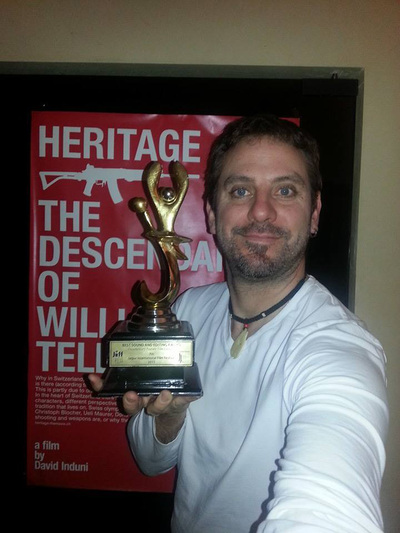 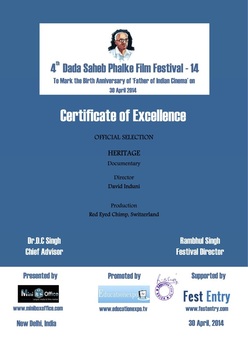 Switzerland, that famous neutral country, is (according to recent statistics) the third most armed population on Earth.
This is partly due to one of its most popular sports “Shooting”.
In the heart of Switzerland there’s a fascinating world of guns, bizarre, interesting characters, different perspectives, controversial ideas and, above all, an exceptional tradition that lives on.

Swiss olympic shooting champions, families of Swiss shooters, politicians and others, tell us why shooting and weapons are, or why they shouldn’t be, so popular in Switzerland.
A centuries-old tradition of coexistence with weapons.

Between the Fifteenth and Nineteenth Centuries, the ancestors of the Swiss were soldiers (mercenaries) for most of the European armies, even the Vatican Swiss Guards who have defended the Pope since the XV century and who still do so to the present day.  All this was always done under the ideal of Neutrality. With the foundation of the Federal Government in 1848, mercenary service was expressly prohibited. The origin of federal defence has, indeed, raised the need for soldiers in Switzerland, a strategy that was reinforced during the First and Second World Wars and which remained until the fall of the Berlin Wall in 1989.

There are elements of the Swiss Confederation that everyone knows about, which portray Switzerland around the world. The punctuality of our trains, the chocolate, clocks, banks, and among other clichés there's even the image of Heidi. But not everyone knows that behind the typical picture-postcard showing the Swiss flag popping out of green mountains, in today's globalized world, we can still discover a country with a strong sense of patriotism linked to its most ancient traditions.

One of these traditions places the Switzerland in third place worldwide - as a country in possession of weapons in private possession. In Switzerland many people own and carry arms. Walking or travelling by train, car or bicycle, both young and adult, men and women can be seen with guns. The weapons are an element that is almost never missing in any family home in Switzerland. All this happens especially in the spring or summer when it's normal to arrive in Central Switzerland and find a whole village turned into a real Gun Paradise. In bars, restaurant, even outside the church, wherever you might be, you can see people carrying guns on their way to the shooting range.

Shooting tournaments in Switzerland reflect a colourful and fascinating tradition and submit various aspects: a parade with antique weapons, flags of different shooting associations, the typical sausage, orchestras playing marches, traditional costumes, theatre operas, games, beer, and all The Descendants of William Tell enjoying their autonomy based on the free use of weapons.

In short, the Swiss people are descendants of mercenaries and say that they are a free people thanks to their armed tradition (the myth of William Tell). Swiss soldiers, even today, do their compulsory military service for a period 360 days  (Israel is the only other country in the world that has a comparable military service). The Swiss population organizes tournaments for children, using war weapons; it has the greatest shooting festival in the world and is statistically the third most armed country on earth. All this results in the present day-to-day living tradition born primarily from the training of civilians to defend the country = the tradition of the shooting sport. Also note that Sport is in the same Federal Department as defence: the Federal Department of Defence, Civil Protection and Sports.

HERITAGE allows us to find out if, for the Swiss, shooting is only a sport, a way of continuing the tradition. Is it true that the use of firearms gives individuals freedom? In what way? How? Which values do we find today in the world of firearms and shooting as a sport in Switzerland? All that and more...